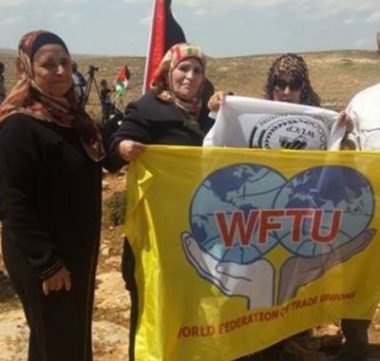 Morad Eshteiwy, the media coordinator of the Popular Committee against the Annexation Wall and colonies in Kufur Qaddoum, said this week’s protest also marks March 30th, the Palestinian Land Day, in addition to its weekly message against the closure of the town’s main road, for the fourteenth consecutive year, Israel’s ongoing illegal construction and expansion of its colonies, and constant violations.

Eshteiwy added that the soldiers shot, and mildly wounded, four Palestinians with rubber-coated steel bullets, while several others suffered the effects of teargas inhalation. The soldiers also damaged a main water pipeline, providing the village and its lands with the needed water supply, and added that Local Council workers managed to fix it four hours later.

The protest marks the 44th anniversary of the Palestinian Land Day, and was attended by dozens of local, Israeli and international peace activists, in addition to representatives of the Workers Union Coalition in Palestine, and the World Federation of Trade Unions.