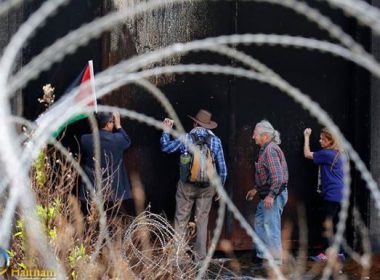 Dozens of Palestinians, accompanied by Israeli and international peace activists, conducted Friday the weekly nonviolent procession in Bil’in village, in the central West Bank district of Ramallah, against the Israeli Annexation Wall and colonies, and condemning the death of a Palestinian teen, who was killed by the Israeli army near Ramallah, Thursday, while three other teens suffered serious injuries.

The protesters marched from the center of the village, carrying Palestinian flags, and chanting for steadfastness, ongoing resistance until liberation and independence, and the release of all political prisoners.

The protesters managed to reach the gate of the Annexation Wall, separating the villagers from their orchards, and started banging on the gate, while chanting and denouncing the killing of Mohammad Mahmoud Hattab, 17, and the serious injuries of his friends Jassem Mohammad Nakhla, 18, Mohammad Mousa Nakhla, 18, and Mohammad Hattab, 18.

They also chanted against the ongoing, and escalating Israeli crimes and violations against the Palestinian people and their property in different parts of occupied Palestine.

It is worth mentioning that German nationals visited the village, and met with the coordinator of the Popular Committee against the Wall and Colonies in Bil’in, Dr. Rateb Abu Rahma, along with several villagers and activists.

Abu Rahma presented to the visiting delegates details about the ongoing nonviolent resistance in Bil’in, the successes it achieved over the last ten years, and the excessive use of violence by the soldiers, leading to dozens of casualties, including several fatalities.

He encouraged delegates and visitors from all over the world to come to Palestine, and join the nonviolent resistance activities to witness the true nature of this ongoing illegal Israeli occupation of Palestine, its apartheid and racist policies.

Also on Friday afternoon, the weekly nonviolent protest in Kufur Qaddoum town, in the northern West Bank district of Qalqilia, and fired many gas bombs, and rubber-coated steel bullets, causing at least ten protesters to suffer the effects if teargas inhalation.