Many Palestinians Suffer Effects Of Teargas Inhalation In Kufur Qaddoum 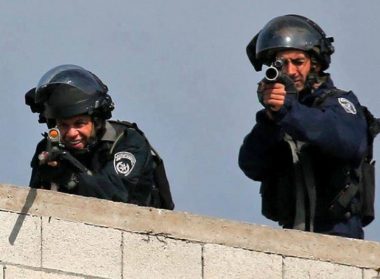 Israeli soldiers attacked, on Friday afternoon, the weekly nonviolent protest in Kufur Qaddoum town, in the northern West Bank district of Qalqilia, and fired many gas bombs, and rubber-coated steel bullets, causing at least ten protesters to suffer the effects if teargas inhalation.

Morad Eshteiwy, the media coordinator of the Popular Committee in Kufur Qaddoum, said Israeli Border Guard units used excessive force against the protesters, and attempted to ambush many of them, to abduct them, but were unable to do so.

Eshteiwy added that at least ten persons suffered the effects of teargas inhalation, and received the needed treatment by filed medics without the need for hospitalization.

The protesters sent their gratitude, respect and appreciation to Rima Khalaf of Jordan, who served as the Executive Secretary of the United Nations Economic and Social Commission for Western Asia (ESCWA) from 2010 to 2017, and resigned from her position after the UN Secretary General Antonio Guterres demanded she withdraws a report categorizing Israel’s illegal practices in occupied Palestine as apartheid.

The ESCWA even withdrew the report from its website just a few days after it was published, after Khalaf refused to withdraw it.