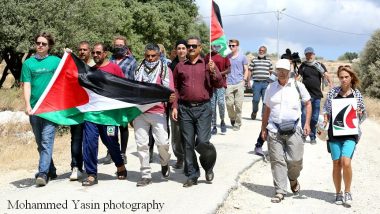 Residents of Bil’in village in the central West Bank district of Ramallah, accompanied by Israeli and international peace activists, held the weekly protester in the village, Friday, also celebrating the victory of three hunger striking detainees, held by Israel.

The procession started from the center of the village, and headed towards the Israeli Annexation Wall, while chanting against the illegal Israeli occupation, ongoing violations and also celebrating the victory of Mohammad Balboul, his brother Mahmoud, and Malek Qadi.

The protesters marched carrying Palestinian flags, and posters of detainee Mohammad Adeeb Abu Rahma from Bil’in, and chanted for national unity, ongoing resistance, the release of all detainees and the removal of Israel’s illegal colonies. They also called on various international governments, human rights and legal groups around the world, to pressure Israel into ending its illegal policies of ‘Administrative Detention,’ holding hundreds of Palestinians captive without charges or trial, in addition to releasing all political prisoners.