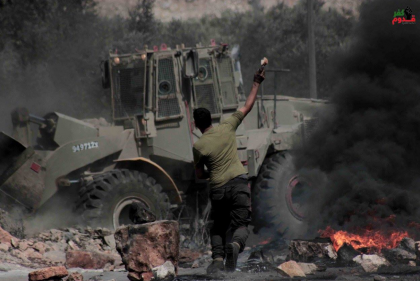 The protesters marched from the center of the village raising Palestinian flags and carrying posters of the detainees who ended their hunger strikes after reaching agreements for their release after extended strikes.

The Popular Committee in Kufur Qaddoum said scores of locals, and international activists, suffered the effects of teargas inhalation, after the soldiers assaulted the protest.

Morad Eshteiwy, the media coordinator of the Popular Committee, said many armored Israeli military vehicles and dozens of soldiers assaulted the protesters, and fired dozens of gas bombs, causing scores to suffer the effects of tear gas inhalation.

Clashes erupted between many local youngsters and the soldiers, in which the youngsters hurled stones at the invading army vehicles, while the soldiers fired additional gas bombs, concussion grenades and rubber-coated steel bullets.

The protesters closed roads with rocks, and burnt tires, in an attempt to stop the advancing military vehicles and armored bulldozers.

It is worth mentioning that army bulldozers closed several interior roads in Kufur Qaddoum with sand hills as an act of collective punishment against the Palestinians, as part of the attempts to force them to stop their protests.

Kufur Qaddoum started the weekly protests thirteen years ago, marching against the army’s closure of the town’s main road to enable easy access to the colonists driving to and from Kedumim illegal colony, and protesting the illegal Annexation Wall and colonies.