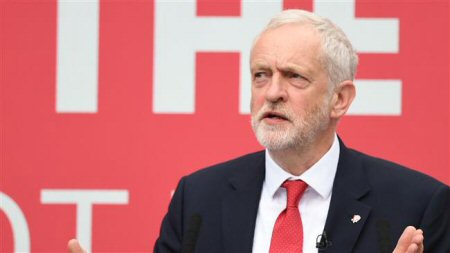 Britain’s Labour party announced, in its 2017 elections manifesto, that, if elected in June, the party would immediately recognize the state of Palestine.

The manifesto stated,according to Ma’an, that the party was committed to a two-state solution to solve the decades-long Israeli-Palestinian conflict, adding that “there can be no military solution to this conflict” and that both Israel and Palestine must “avoid taking action that would make peace harder to achieve,” referencing the need to end the decade-long Israeli siege, the half-century Israeli occupation of the West Bank, and Israel’s continued settlement expansions.

It added that Hamas, the de facto leaders in the besieged Gaza Strip, must also end rocket and “terror attacks,” in order for leaders to enter “meaningful negotiations” and develop a “diplomatic resolution.”

“A Labour government will immediately recognize the state of Palestine,” the manifesto added.

Earlier this month, the United Kingdom’s House of Lords released a statement that strongly criticized the British government’s “very degrading, dismissive attitude” towards international efforts to solve the Israeli-Palestinian conflict, and suggested that it take a stronger stance to advance a two-state solution, including recognizing a state of Palestine.

Slamming US President Donald Trump’s policy-making as “mercurial and unpredictable,” the report called for a more engaged British political stance in the Middle East, including vis-a-vis Israel and Palestine.

Calling the peace process “bogged down, static, and paralyzed for some years now,” the report denounced Trump’s ambivalent stance on the conflict, as the American head of state said in February that he could “live with either” a one- or two-state solution, in a significant departure from the US’ publicly held position in favor of a two-state solution to the conflict.

The report also denounced Trump’s campaign promise to move the US embassy in Israel from Tel Aviv to Jerusalem as “inflammatory,” and his appointment of settlement supporter David Friedman as ambassador to Israel as likely to raise tensions.

The report was also critical of the international community’s reaction to Israeli violations of international law, saying that Israel was “treated with kid gloves.”

It reiterated the UK’s position in support of a two-state solution, calling it “the only way to achieve an enduring peace that meets Israeli security needs and Palestinian aspirations for statehood and sovereignty.”

However, it warned that the current context made it increasingly likely that a two-state solution “becomes an impossibility and is considered no longer viable by either side,” and called for the Israeli-Palestinian conflict to remain a priority in British foreign policy.

“The government should give serious consideration to now recognizing Palestine as a state, as the best way to show its determined attachment to the two-state solution,” the report read.

While members of the international community have rested the solution to the Israeli-Palestinian conflict on the discontinuation of illegal Israeli settlements and the establishment of a two-state solution, a growing number of Palestinian activists have criticized the two-state solution as unsustainable and unlikely to bring durable peace given the existing political context, proposing instead a binational state with equal rights for Israelis and Palestinians.