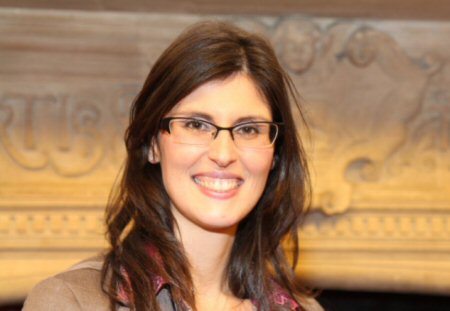 Layla Moran, the first British Member of Parliament of Palestinian descent, has urged the UK to “step up to the plate and lead” over the issue of Palestine given that the US President “can now in no way be considered an honest broker.”

The MP launched her scathing attack on Donald Trump in the light of the UN Relief and Works Agency’s efforts to cover its budget deficit. The US was UNRWA’s biggest donor, but Trump cut its funding in September, even though the agency provides essential education, healthcare and social services for millions of Palestinian refugees.

Moran’s mother, Randa, is a Christian Palestinian from Jerusalem and the MP still has family living in the West Bank city of Ramallah. Her British father’s diplomatic career took the family all over the world. Although the 35-year-old Oxford West and Abingdon MP usually downplays her Arab heritage, she has had a busy week defending Palestine and has secured a parliamentary debate on Palestinian Statehood to be held early next year. Furthermore, she seized an opportunity on Wednesday to challenge the Foreign Office on what it was doing after Trump’s move to cancel America’s donations to UNRWA.

Minister of State for the Middle East Alastair Burt is well aware that Trump’s funding cut will have a devastating impact on the five million Palestinians who rely on UNRWA; he is also a Minister of State for the Department of International Development. “The UK has made official-level representations to the EU and World Bank over the past three months on the position of UNRWA,” he responded to Moran’s question. “We will continue to work with UNRWA and our international partners to help ensure essential services are maintained, despite the United States’ withdrawal of funding.”

Moran, a Liberal Democrat MP who won her seat in the 2017 snap general election, asked if the British government will consider hosting a donor conference to make up the shortfall in funding. “Further, will they support my Palestinian statehood Bill, which I will be introducing to the House later today?”

Burt said that the recognition of Palestine remains a matter for the UK’s judgment in the best interests of “peace and the peace process”, although there is neither in the Middle East at the moment. As far as support for UNRWA is concerned, he added: “We continue to work with other donors and urge them to step in to assist in filling the gap in funding. We have done that with other states and we are doing that with the EU and the World Bank. We will continue to do so. We have increased our contribution this year to £57.5 million to help vulnerable Palestinians in relation to health and education. We will continue to support UNRWA.” He said nothing about government support for Moran’s Bill.

The LibDem MP’s performance earned praise from the new Palestinian Ambassador in London, Dr Husam Zumlot. “I spoke with Layla this morning and I welcomed what she did,” he told MEMO. “I called her immediately. She has a brilliant career of serving Britain and represents the very best of the relationship between our two countries.” He added that the debate on statehood will create the right atmosphere for a “just peace” in the Middle East as an entry point to discussion and an incentive to peacemaking.

Zumlot was the Palestine Liberation Organisation’s main diplomat in the United States until September, when the Trump administration closed the PLO’s office in Washington as part of an effort to block moves against Israel at the International Criminal Court.

The debate on Palestinian statehood is scheduled for Friday, 8 February and came about after Moran submitted her Bill on Wednesday to have Palestine recognised as a state officially by Britain. She told the media that she hopes that Britain will change its position on such recognition.

“Since I was elected I have been dismayed at the progress the Conservative Government has made towards recognising the state of Palestine,” she said in a statement issued to Anadolu Agency. “I am in favour of a two-state solution, but until the state of Palestine is recognised, the two actors can’t come to the table as equal partners.”

She added that it is “vital” for Britain to acknowledge the role that it has played in the current situation in Israel-Palestine being what it is, not least because of the Balfour Declaration, issued 101 years ago this month. “Whilst I appreciate that the UK recognising the state of Palestine alone won’t be a solution, doing it would go some way to reigniting the spark of hope that has gone out in the heart of Palestinians across the world.”

In 2012, the UN General Assembly granted Palestine the status of a non-member observer state. To date it has been recognised by 137 of the 193 countries in the world which are UN members.

Moran’s arrival as Britain’s first MP of Palestinian heritage raised eyebrows after she overturned a Conservative majority of almost 10,000 votes to win her Oxford seat by a narrow margin of 816 votes. When asked about her ethnicity she said at the time: “My Palestinian background has made me interested at a global level. Politics was always at the dinner table, it primed me to engage.”

She speaks four languages as well as English — French, Arabic, Spanish and Greek — and is not the only one in her family to enjoy a high profile. Her great-grandfather, Wasif Jawhariyyeh, was a celebrated writer who wrote extensive memoirs about Palestinian life under Ottoman and British rule, before fleeing Palestine after the State of Israel was created.

Just as she hopes that Britain will step up and take a lead on Palestine, activists seeking justice for the Palestinians hope that Layla Moran’s background will take on more significance in her political life. Not least, they say, so that she adopts a leading role in civil society campaigns to right the significant wrongs precipitated by Balfour and successive British governments since 1917. Her debate on Palestinian statehood will be a great place to start.