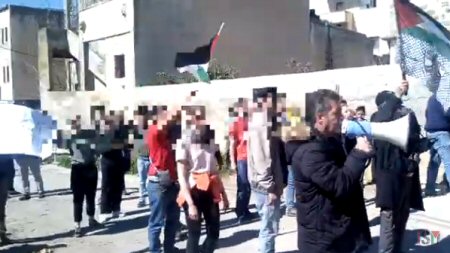 Peaceful weekly demonstrations have been happening in Kafr Qaddoum since 2011, in response to the closure of a historical road by the Israeli Defense Forces in 2002. Kafr Qaddoum has been denied access to this road for over almost two decades now, restricting their travel and commerce, and more insidiously, allowing further illegal settlements to expand all around them.

This February, the Israeli military told the people of Kafr Qaddoum that the illegal road block would finally be removed, and that their years of non violent demonstration were finally about to pay off, promising to open the road on March 1st.

Things were rather quiet for the month of February while the people of Kafr Qadd0um waited patiently and in excitement for the Israeli Defense Forces to keep their new promise, but March 1st came, and the villagers were met with violence instead of a celebration.

150 demonstrators chanted “Free Palestine” while 40 soldiers stormed the village firing live ammunition, rubber coated steel bullets, tear gas and concussion grenades. Internationals from Finland, the United States and Belgium were there, as well as the Press, all of which were targeted multiple times with concussion grenades while trying to record this day of broken promises and peaceful demonstration. Despite heavy clouds of tear gas, the people of Kafr Qaddoum demonstrated and danced resiliently. Overhead doves could be seen flying, joining the people in their beautiful resistance.