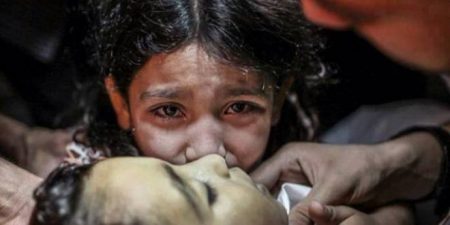 (photo: Palestinian girl crying her brother, who was killed by the Israeli army, in the 2014 war on Gaza.)

According to the PNN, the Israeli Information Center for Human Rights in the Occupied Territories, B’Tselem, has recently revealed that Israeli investigations into the events of Israeli 2014 military aggression on Gaza are attempting to create the false impression of a functioning system that ostensibly seeks to discover the truth.

In the meantime, those actually responsible for violations are not even questioned, and the investigations have been confined to superficial inspections of a number of isolated incidents, divorced from any context, the report said. The scale of Palestinian civilian casualties in the Gaza Strip was enormous.

Almost two-thirds of the total Palestinian casualties – 1,391 people, including 526 minors – were not involved in the fighting. Hundreds of these victims were killed when their homes were bombed from the air.

These figures raised grave concerns that Israel had breached the international humanitarian law, according to the report.

However, much like investigations into previous rounds of fighting, neither government officials nor senior military commanders, who devised the policy, were responsible for the orders and made operational decisions during the fighting – were ever investigated by any official body nor held to account for their responsibility for the devastating effects of their decisions.

The report pointed out that several Israeli politicians, jurists and senior officers in the military declared that there was no need to investigate the military.

Statements made by officials imply that one of the reasons they favor investigations – even if merely ostensibly – of suspected breaches of law during “Operation Protective Edge” is a desire to prevent the International Criminal Court (ICC) in The Hague from addressing the issue itself.