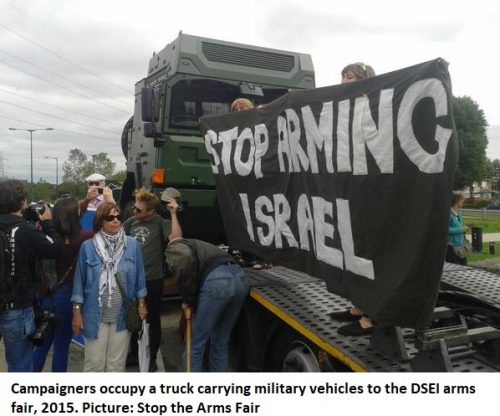 By Tom Anderson: This September, the world’s largest arms fair will be held in London. The DSEI weapons exhibition will be hosting political and military delegations from around the world who will be shopping for drones, guns, missiles, tanks and ammunition from the thousands of arms companies who will be attending.

Representatives from the Israeli government and military, as well as executives from Israeli arms companies, will be coming to London to buy and sell weapons. Campaigners are holding a week of action, aimed at blocking the weapons before they arrive for display at the ExCeL Centre in East London’s Docklands, where the event is taking place.

Israel regularly sends an official delegation to the DSEI arms fair. The last two biannual events have also featured an ‘Israel Pavilion’ ‚Äì extra space bought to promote the Israeli arms industry. The companies represented at DSEI include Elbit and Israeli Aerospace Industries, which manufacture the drones used to carry out attacks on Gaza.

The Israeli participation at DSEI is organised by SIBAT, the body within the Israeli Ministry of Defence that promotes arms exports. SIBAT was a sponsor of DSEI in 2013. It was also listed as a sponsor on the DSEI website in 2015, but the information was removed when campaigners spotted it.

The Israeli state’s military expenditure has been steadily increasing every year, and stood at $17977 million in 2016. According to the Stockholm International Peace Research Institute, from 2013-2016, just some of the arms transfers to Israel included over 4700 Small-Diameter Bombs and guided bombs, manufactured by US arms company Boeing, and hundreds of tank engines manufactured by German company Motoren-Und Turbinen-Union Friedrichschafen (MTU). Both Boeing and MTU will have stands at DSEI 2017.

On 22 July 2014, Mohammed Abedallah, a resident of Gaza city, was with a group of activists searching through the rubble caused by the Israeli bombardment. The Israeli military had announced a two hour ‘humanitarian ceasefire’.

Mohammed’s friend Salem Shamaly went into a ruined building to search for members of his family. When he came out of the building he was hit by bullets from an Israeli sniper, despite the fact that he was clearly unarmed and a ceasefire was in place. Salem was hit first in the leg, but was hit again and again. He was killed. A video of his death shot by volunteers from the International Solidarity Movement soon went viral.

Salem’s death was a clear example of a war crime, and the UN Commission called his death “an act of wilfull killing”. Despite this, no war crimes investigation has taken place and no-one has been prosecuted. Mohammed witnessed Salem’s death, and has been campaigning for justice for his friend ever since. He has made a film about Salem’s murder. He said: “I can say as a witness of a war crime in Gaza that any buying or selling from or for Israeli forces is directly killing a Palestinian somewhere. You can’t call it anything else”.

Call for a military embargo

For many years, Palestinians have been calling for a military embargo against Israel and for activists to take action against the buying of weapons from Israeli arms companies. According to Maren Mantovani, member of the international secretariat of the Palestinian Boycott Divestment and Sanctions National Committee (BNC): “Israel utilizes military force to maintain its decades long oppression of the Palestinian people. Israel‚Äôs military industry also serves as an economic engine with 7000 public and private Israeli security companies working in the military and homeland security sectors. Around 70% of Israeli arms and ‘homeland security’ technology is exported internationally and is sold in arms fairs like DSEI.

“Providing Israel with a platform to market its weapons and military equipment provides a financial lifeline to its regime of occupation, apartheid and settler-colonialism. It also legitimises Israel‚Äôs use of those arms and technology in violation of international law and Palestinian rights.

“By holding this arms fair and giving space to the entire industry of death to enrich itself, the UK deepens its complicity, not only with Israeli violations of international law, but with violations committed by repressive regimes worldwide.

“We stand in solidarity with protesters taking action to shut down the the DSEI arms fair and the demand to expel Israel from this blood-stained fair.”

Israeli activist Kobi Snitz said: “Israeli oppression of Palestinians is a permanent feature of its government policy. From housing discrimination to home demolitions of Palestinian citizens of Israel to military assaults on civilian populations killing thousands of Palestinians in the Gaza strip. Any weapons which are sold to Israel will be directly involved in this criminal activity. No amount of public relations by weapons manufacturers and their financiers can change this basic fact.”

¬ÝAccording to Maren Mantovani of the BNC, “Israel’s branding is that of ‘field tested’ technology. The recurring large scale massacres against the besieged Gaza Strip as well as the technology used to colonise the occupied West Bank, such as the surveillance technology for the Apartheid Wall, or the day to day repression and Orwellian control systems such as those used in the Old City of Jerusalem that have sparked the latest wave of protest are all on sale in DSEI and other arms fairs.

“By taking measures of direct action, UK citizens are not only standing in solidarity with the Palestinian people, but they are also acting in self-defence; bringing an end to the arms trade with Israel would ensure that tools of repression tested and perfected on Palestinian bodies are not then used for repression in the UK.”

¬ÝIt’s not just arms companies that are enabling Israel’s repression of Palestinians. According to UK campaigning NGO War on Want, HSBC, a multinational bank headquartered in London, owns over ¬£800 million worth of shares, and arranged over ¬£19 million of loans, to companies supplying weapons to Israel. According to Mantovani, “UK banks and financial institutions participate in Israel‚Äôs militarized repression by holding shares in companies that export military technology and weapons to Israel, and by providing and facilitating loans to companies producing such military technology and weapons.

“By investing in and providing loans to the arms companies that help Israel to oppress Palestinians, HSBC is lending its support to Israel‚Äôs violations of international law.

“HSBC is profiting from the armed violence and repression that lies at the heart of Israel‚Äôs system of oppression over the Palestinian people. HSBC also appears to be acting in violation of the UN rules on business and human rights and its own stated commitment to not provide support to the arms industry.”

In response, as part of a recent day of action, HSBC branches around the UK were picketed, with several branches closed. Campaigners have pledged to keep up the pressure on HSBC.

Maren concludes by saying, “Shutting down the DSEI arms fair is simply a humanly decent thing to do in our collective struggle for a world that is more just and equal.”

The Stop the Arms Fair week of action will be held from 4-11 September. Activists will use a diversity of tactics to try to prevent the weapons from being delivered to DSEI. During the week campaigners will be holding different themed days of action. The first of the themed days is Stop Arming Israel, where activists are planning to “block the set-up” with a creative demonstration featuring “music, workshops, and bucket-loads of food”.

To find out more about the week of action go to www.stopthearmsfair.org.uk

The Stop Arming Israel day of action at DSEI will be on Monday 4th September.

By Tom Anderson of Shoal Collective, a newly-formed cooperative of independent writers and researchers, writing for social justice and a world beyond capitalism.