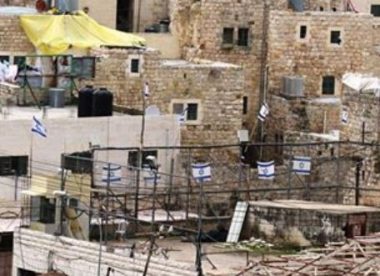 The Hebron Reconstruction Committee managed to achieve an Israeli High Court ruling evicting Israeli colonists, illegally occupying “Abu Rajab” home, in the southern part of the West Bank, after the family proved its legal ownership of the property.

The court also asked the prosecution to ensure the eviction of the colonist, to which the prosecutor’s office responded that they needed a week to “negotiate with the settlers,” and if no agreement is reached, they “will be evicted by force at a later date.”

Resident Hazem Abu Rajab Tamimi, one of the owners of the property, said the Israeli ruling consists of 35 pages, adding that the family lawyers were not informed about its contents until they demanded a copy.

“The ruling is a very positive development,” he said, “We hope that the illegal colonists will be removed from our home as soon as possible,” he added.

Following the ruling, the colonists illegally occupying the property, assaulted a 55-year-old woman from Abu Rajab family, causing minor cuts and bruises, before local medics moved to a clinic.

Abu Rajab stated that, since the colonists occupied the first and second floors of the building, they have been constantly harassing the family, but it remained steadfast and determined to stay here, and regain their lawful ownership of their own home.

“For more than three weeks, the colonists have been trying to keep us out of our own home, but we will never leave; we will not abandon it for them to occupy,” he said.