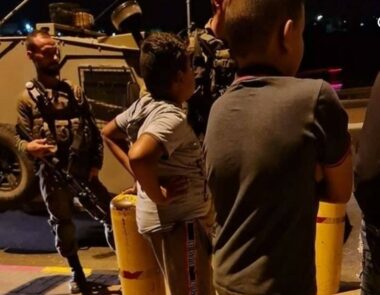 Israeli soldiers abducted, earlier Monday, at least thirteen Palestinians, including two children and a cancer patient, from their homes in several parts of the occupied West Bank, the Palestinian Prisoners Society (PPS) has confirmed.

The PPS stated that the soldiers invaded and ransacked many homes in several parts of the northern West Bank governorate of Jenin, and abducted two young men, identified as Anas Adnan Hamarsha and Mosab Bilal Herzallah.

It added that Anas, a former political prisoner, was injured after being repeatedly attacked by the soldiers who stormed and ransacked his home before abducting him.

It is worth mentioning that Abdul-Basset is a cancer patient and is receiving treatment. His family voiced an urgent appeal for his release so that he can continue his medical treatment.

In Hebron, in southern West Bank, the soldiers abducted Nader Ramzi Zahda, in his twenties, from his home in the Dahia area in the city.

Furthermore, the soldiers invaded the al-Baloa’ neighborhood in the al-Khader town, south of Bethlehem, before storming a constructions supplies store, owned by Mohammad Hasan Abu Sorra, and a car repair center, and violently searched them.

The soldiers also invaded and searched several homes in the town, and interrogated many Palestinians while inspecting their ID cards.

The soldiers also assaulted a young man, identified as Lufti Salah, and maced him with pepper-spray, before confiscating his mobile phone.

In addition, the soldiers invaded Tammoun town, south of Tubas in northeastern West Bank, before searching and ransacking the home of  Khader Toubassi, and interrogated him in his property, after failing to find his son.