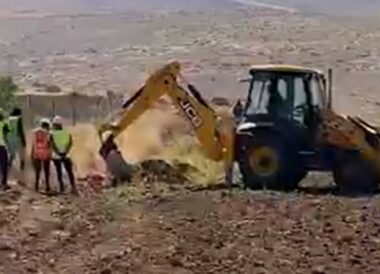 Israeli soldiers invaded, Monday, Palestinian lands in Masafer Yatta, south of the southern West Bank city of Hebron, and bulldozed them leading to the destruction of a water line and a road.

Rateb Jabour, the coordinator of the National and Popular Committees against the Annexation Wall and colonies in southern Hebron, said the Israeli bulldozers destroyed the waterline and a dirt road linking Masafer Yatta with the villages of al-Fakheet and Khallet ad-Dabe’.

Jabour added that the attack is not the first against the lands and the water networks in the area, and aims at removing the Palestinians and annexing their lands for the construction and expansion of the illegal colonies.

It is worth mentioning that the Committee, in cooperation with the Tiwana and al-Masafer village Council, has previously rehabilitated the road and the waterwork after a similar attack by the Israeli army.