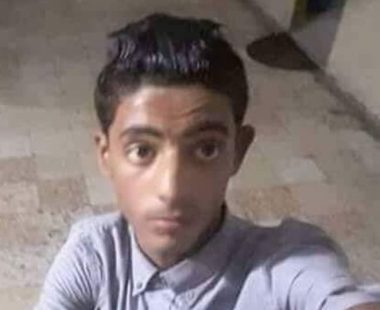 The Palestinian Health Ministry in the Gaza Strip has reported that a child died, Saturday, from serious wounds he suffered of August 3rd after Israeli soldiers shot him in Khan Younis, in the southern part of the coastal region.

The Health Ministry said the child, Soheib Abdul-Salam Abu Kashef, 16, was shot with live Israeli army fire, and remained in a serious condition until he succumbed to his wounds at the Gaza European Hospital.

On the day of his serious injury, the Health Ministry said the soldiers engaged in the excessive use of force against the nonviolent “Great Return March” in Gaza, on its nineteenth consecutive week, killing a young man, identified as Ahmad Yahia Atallah Yaghi, 25, and wounding 220 Palestinians, including 90 who were shot with live fire.

On Friday, September 14, 2018, the Israeli army Killed three civilians, including a child, and Injured 148, Including 19 children, five Women and five paramedics, the Palestinian Center for Human Rights (PCHR) has reported.

It is worth mentioning that the soldiers attacked, Saturday, Palestinian protesters in several areas in the eastern part of the Gaza Strip.

The soldiers fired many live rounds and gas bombs at protesters near the fence in Abu Safiyya area, east on Jabalia, in northern Gaza, causing many to suffer the effects of teargas inhalation.

In addition, the army claimed that a number of protesters hurled stones and Molotov cocktails in several areas near the perimeter fence, and launched what the military called “incendiary balloons” into Keryat Gat colony.