Christians Speak to Archbishop of Canterbury about Life in Gaza 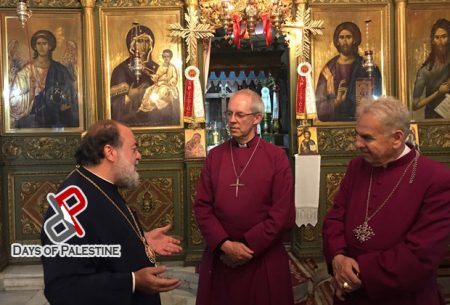 Christian residents of the Gaza Strip recently spoke about their daily life to Archbishop of Canterbury Justin Welby, during a surprise visit to the coastal enclave.

During his visit to the Gaza Strip, the Archbishop sat with leaders of the Christian community in Gaza, and listened to their life experience under the rule of the Islamic Palestinian movement Hamas.

Philip Tarazi, one of the Gaza Christians who were selected to meet with the Archbishop Justin Welby, described the life in Gaza as “smooth.”

However, he did complain of the 11-year-old Israeli siege, which pushed hundreds of Christians to escape the “beautiful” city, according to Days of Palestine.

Under the 11-year-old Israeli siege on Gaza, the Israeli occupation carried out three major offensives that claimed the lives of more than 4,000 Gaza residents, including Christians.

During the Israeli offensives, Christians opened their churches and other facilities for their Muslim neighbors to stay at, after their houses had been destroyed. They also opened their private clinics to treat the wounded.

Justin also visited Gaza War Cemetery, where British and imperial troops who were killed in Gaza in 1917 are buried. He laid a wreath at the cemetery, where 3,691 British troops are laying.

Israeli and pro-Israeli media has reportedly faked news reports several time to give the appearance that Gaza Christians are persecuted under Hamas rule in order to cover up its crimes, as well as the siege, which reduced the Christian community in Gaza from 3,000 to about 1,300.

Speaking with Christians leaders and members of the Christian community in Gaza, they condemned the Israeli propaganda machine, accusing it of using them to justify its crimes against humanity.