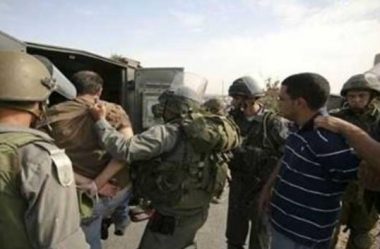 Israeli soldiers attacked, on Saturday evening, a nonviolent procession in support of the hunger striking Palestinian detainees, in the al-Ma’sara village, south of Bethlehem in the occupied West Bank, and abducted a father and his two sons.

Local activist Ahmad Brejiyya stated that the procession started from the center of the village, and headed towards Jouret ash-Sham’a nearby village.

He added that the soldiers assaulted the protesters who were marching there, stopped many cars carrying nonviolent protesters, and forced them back, after preventing them to reaching Joret ash-Sham’a.

The soldiers then abducted Ahmad Zawahra, along with his sons, Mohammad, 21, and Ibrahim, 18, and took them to an unknown destination.