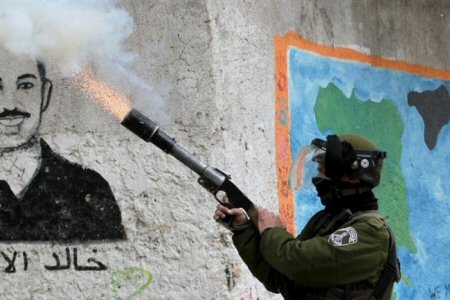 Israeli soldiers violently suppressed protests in the southern occupied West Bank city of Bethlehem for the third day in a row, on Saturday, firing tear gas and sponge-tipped bullets at locals.

Dozens of people were treated for severe tear-gas inhalation while others were injured with sponge bullets, according to Ma’an News Agency.

Clashes had broken out at around 8 a.m. near the apartheid wall at the northern end of the city, as Palestinians — mostly young men — continued protesting against Donald Trump’s decision to recognize Jerusalem as the capital of Israel.

Confrontations continued throughout the afternoon. Locals said that, at around 4 p.m., fierce clashes had erupted in the nearby Aida refugee camp after some Palestinian youth set fire to an unmanned Israeli military watchtower in the camp.

Soldiers responded by showering the camp with gas.

The events in Aida, tonight, come a month after the Commissioner General for the United Nations Relief and Works Agency for Palestine Refugees in the Near East (UNRWA), Pierre Krähenbühl, delivered a speech saying that “health experts suggests residents of Bethlehem’s Aida camp are exposed to more tear gas than any other population surveyed globally.”

Photo: An Israeli soldier fires a tear gas canister towards Palestinian protesters in the Aida refugee camp, near the West Bank city of Bethlehem.(AFP/Mousa al-Shaer, File)