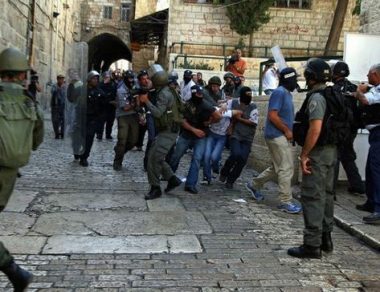 The soldiers, and mounted officers, resorted to excessive force against the Palestinians, and fired dozens of gas bombs and concussion grenades at them, in addition to grabbing Palestinian flags and confiscating them.

In addition, the soldiers detained legislator Jihad Abu Zneid after assaulting her.

The Palestinian Red Crescent said twelve Palestinians were injured due to the Israeli attack.. The procession was held as part of ongoing protests in Jerusalem, and several parts of Palestine, against Trump’s decision, recognizing the occupied city as the capital of Israel, in  direct violation of International Law.

On Saturday evening, the soldiers fired several shells at homes and lands in Beit Hanoun, in the northern part of the Gaza Strip, causing property damage.

On Saturday at dawn, the army killed two fighters of the Al-Qassam Brigades, the armed wing of Hamas, south of Gaza city. They have been identified as Mahmoud Mohammad al-‘Atal, 29, ad Mohammad Safadi, 25.

Several Palestinians were also injured by Israeli army fire, Saturday, after the soldiers attacked protesters in various border areas, in the northern and eastern parts of the Gaza Strip.

On Friday, the soldiers killed two Palestinian civilians, identified as Maher Atallah, 54, and Mahmoud al-Masri, 30, and injured 153 Palestinians, including an infant, in the Gaza Strip alone.