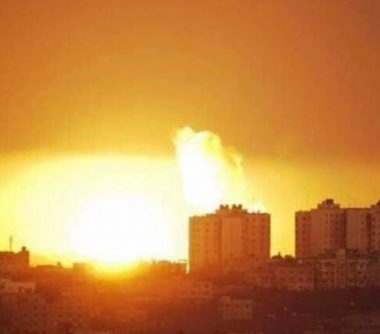 The Palestinian Health Ministry in Gaza has reported that Israeli soldiers fired, on Saturday at dawn, several missiles into an area, south of Gaza city, killing two Palestinians, and causing serious damage to many buildings.

Dr. Ashraf al-Qedra, the spokesperson of the Health Ministry in Gaza, said medics and rescue teams rushed into the bombarded area, and located the remains of two Palestinians, buried under the rubble.

He added that the two Palestinians have been identified as Mahmoud Mohammad at-‘Atal, 29, from Sheikh Radwan area, and Mohammad Jabr as-Safadi,25, from ad-Daraj neighborhood, in Gaza city.

The Al-Qassam Brigades, the armed wing of Hamas, said the two are members of the group, adding that the bombarded site “Bader” was run by it.

The army also fired many missiles into three other Qassam sites, south of Gaza city, in addition to Khan Younis, and east of Jabalia, in northern Gaza.

On Saturday morning, Israeli soldiers, stationed across the border fence, shot and injured at least one Palestinian, and caused many others to suffer the effects of teargas inhalation.

Media sources said the army attacked dozens of protesters, who marched in Khuza’a town, east of Khan Younis, moderately wounding one teenager, and caused many others, mainly school students, to suffer the severe effects of teargas inhalation.

The wounded teen was rushed to Nasser hospital, in Khan Younis, while the medics provided treatment for many Palestinians who suffered the effects of teargas inhalation.

The soldiers also shot a woman, 35, with a live round in her shoulder, in the eastern part of the Gaza Strip.

The Israeli army claimed it was retaliating to shells fired from Gaza, on Friday, on Sderot and nearby areas, in the Negev.

On Friday evening, the army bombarded many areas in northern Gaza, wounding at least fifteen Palestinians, including a child who suffered life-threatening injuries.

It Is worth mentioning that the Palestinian Health Ministry reported, Friday, that Israeli soldiers killed two Palestinians, and injured 1114 others, in several parts of the occupied West Bank, including occupied Jerusalem, and the Gaza Strip.