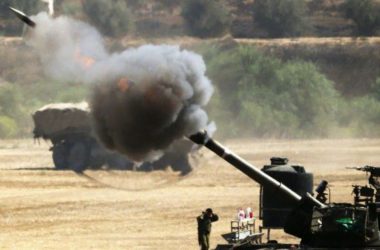 Israeli soldiers fired, on Saturday evening, several shells at homes and lands in Beit Hanoun, in the northern part of the Gaza Strip, causing property damage.

The soldiers fired at least three tanks shells, two into farmlands lands, and one which detonated near a home, causing serious damage but no injuries.

The Israel claimed that “it was retaliating to shells fired earlier” at a settlement, close to the border with Gaza.

On Saturday at dawn, the army killed two fighters of the Al-Qassam Brigades, the armed wing of Hamas, south of Gaza city. They have been identified as Mahmoud Mohammad al-‘Atal, 29, ad Mohammad Safadi, 25.

Several Palestinians were also injured by Israeli army fired, Saturday, after the soldiers attacked protesters in various border areas, in the northern and eastern parts of the Gaza Strip.

On Friday, the soldiers killed two Palestinian civilians, identified as Maher Atallah, 54, and Mahmoud al-Masri, 30, and injured 153 Palestinians, including an infant, in the Gaza Strip alone; three of the wounded are in serious condition.