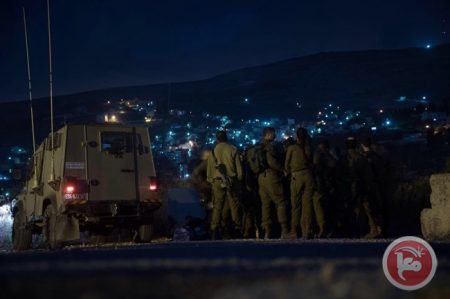 An Israeli soldier was injured with a rock during clashes at the entrance of the al-Jalazun refugee camp, in the central occupied West Bank district of Ramallah, on Thursday evening.

Clashes erupted after Israeli forces set up a checkpoint near the refugee camp, following the death of 23-year-old Ma’an Nasser-Eddin Abu Qare’, who was killed by Israeli forces on Thursday afternoon, after he allegedly attempted to stab Israeli soldiers at a bus stop, in eastern Ramallah.

Israeli soldiers fired tear-gas bombs and stun grenades at local youth who gathered near the flying checkpoint, while the youth threw rocks at Israeli forces, injuring one soldier.

Israeli forces also closed the Attara checkpoint north of Ramallah, which connects the northern and central West Bank, and a main road near the refugee camp connecting Ramallah to Jerusalem.

Earlier in the afternoon, according to Ma’an, Israeli forces closed the main entrances to the Ramallah-area villages of Dura al-Qaraa, Silwad and Deir Jarir towns.

Locals reported that the checkpoint and road closures made travel in between Ramallah and villages north of the city nearly impossible.

An Israeli army spokesperson said they were looking into reports.

Abu Qare’ was the 238th to be killed by an Israeli since the beginning of a wave of unrest across the occupied Palestinian territory and Israel, in October of 2015.

Israel’s response to alleged attacks — both large and small — such as punitive home demolitions, the sealing of entire villages, mass detention campaigns, and withholding the bodies of Palestinians slain while committing attacks, has been condemned by rights groups, who have said the measures amount to “collective punishment” and represent a clear violation of international law.