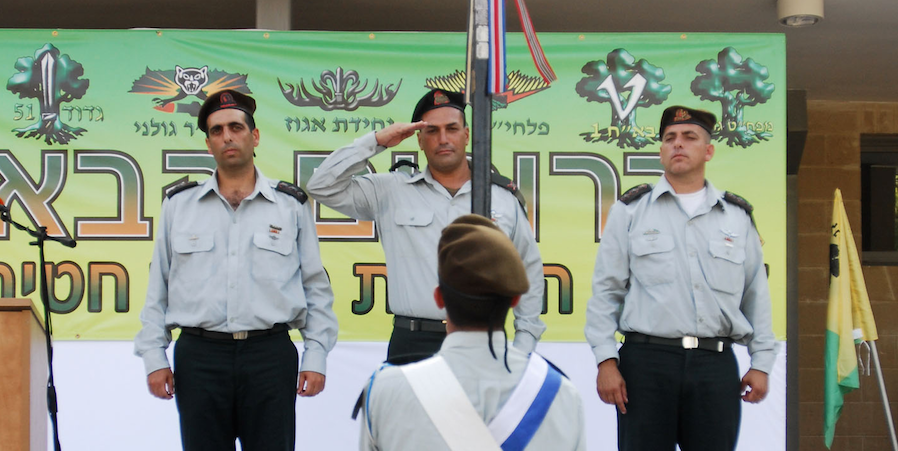 The Israeli military appoints a settler as chief rabbi who once said soldiers can rape ‘enemy’ women, and relieves a decorated war criminal of prison time for rape.

Eyal Krim, the new chief rabbi of the Israeli army, and Ofek Buchris, a former Israeli colonel, are inspirational symbols to national-religious rabbinic schools supportive of entrenching the Israeli occupation of Palestine. Both men were educated in Ateret Cohanim, a settler organization that seeks to impose a Jewish demographic majority in East Jerusalem by combining religious schooling with settlement expansion.

Krim went on to serve in elite (read: violent) units in the Israeli army, before becoming a rabbi in it. Buchris eventually rose to be the commander of Battalion 51 in the Golani Brigade, and led Israel’s reoccupation of the West Bank in 2001, which killed nearly 500 Palestinians. His last position was commander of the Command and Staff College.

The two are also known misogynists.

Krim’s promotion to chief rabbi of the Israeli army was blocked when three Israeli politicians from the left-leaning Zionist Meretz party petitioned his appointment based on statements he made, in 2002 and 2003, about Jewish law and raping non-Jewish women in wartime.

“Although fraternizing with a non-Jewess is a very bad thing, it is allowable in war out of consideration for the difficulties of the fighters,” Krim wrote in the statement in question. “And, because the success of the collective is what mostly concerns us in war, the Torah allows the individual to satisfy his lust in the permitted conditions for the sake of the collective success,” it concludes.

But, Meretz ultimately chose to treat Krim’s violent attitudes towards women the same way it did his extremist settler background: inconsequential. The politicians withdrew their petition against Krim after he issued an apology, in which he expressed sorrow for not choosing his words carefully when answering a “complicated question.” He also disavowed the notion that Jewish law sanctions rape. He will be officially appointed as chief rabbi of the Israeli army on Thursday.

This is a sad reflection on Israeli parliamentary politics: Meretz, the party whose campaign platform in the previous elections was “Left: That’s Meretz,” is not only a deeply nationalist party; it is pedaling the myth that endorsing the rape of non-Jewish women is a verbal misstep.

Buchris, on the other hand, was suspended from his position in March after two women, both fellow soldiers, charged him of rape, sexual assault and molestation. He was taken to military court to stand trial for three counts of rape as well as 13 other offences.

The courts offered Buchris a plea bargain and cleared him of rape charges and prison time, so long as he admits to “prohibited consensual sexual relations.” Buchris accepted the plea deal and will maintain the rank of lieutenant colonel and receive a suspended sentence. Whether he will be accepted into reserve service is unresolved. But if he is held to same standards as the military’s top brass, there is no reason why he won’t be welcomed with open arms.