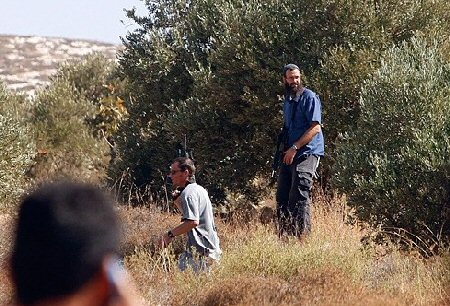 Rashed Marar, head of the village council, told Ma’an News Agency that a number of Israeli settlers from the illegal Israeli settlement of Hill 777, located north of Yanun, chopped down dozens of almond trees.

Marar mentioned that he was unable to reach the area due to Israeli forces surrounding the trees and providing protection to the settlers.
Hence, Marar could not confirm the actual number of trees that have been chopped down.

More than 600,000 Israelis live in Jewish-only settlements across occupied East Jerusalem and the West Bank in violation of international law, with recent announcements of settlement expansion provoking condemnation from the international community.

The Israeli human rights group B’Tselem reported that Israeli settlers’ vandalism in the occupied West Bank is a daily routine and is fully backed by Israeli authorities.

“In just over two months, from the beginning of May to 7 July, 2018, B’Tselem documented 10 instances in which settlers destroyed a total of more than 2,000 trees and grapevines and burned down a barley field and bales of hay,” B’Tselem said in its report.

The report added: “Settler violence and vandalism takes place with full backing by the Israeli authorities. Sometimes soldiers take part in the assault; at other times, they stand idly by. The police makes no substantial effort to investigate the incidents, nor takes measures to prevent them or stop them in real time.”