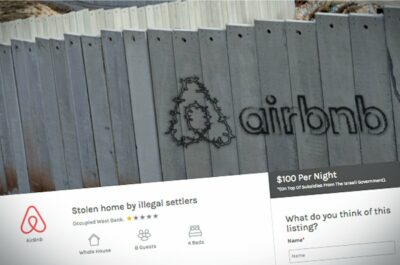 A global coalition launched a campaign, today, against the international tourism company, Airbnb, for reversing its decision to delist properties in illegal Israeli settlements in the occupied West Bank and Jerusalem, according to a press release.

WAFA reports that the coalition is asking people from around the world to deactivate their Airbnb accounts on Nakba Day, 15 May. So far, thousands of people across the world, from Chile to Indonesia, have answered the coalition’s call to action and have committed to #deactivateAirbnb.

Despite the intense documentation and scrutiny from prominent human rights organizations such as Human Rights Watch and Amnesty International, Airbnb is choosing to directly promote discrimination, oppression, and injustice – and failing to uphold its corporate responsibility to respect human rights, it said.

“It is time to end this culture of impunity that has allowed the occupation, oppression and dispossession of the Palestinian people to continue,” said Salem Barahmeh, executive director of the Palestine Institute for Public Diplomacy.

“International companies are complicit in perpetuating this injustice and must be held accountable. Through the #deactivateAirbnb campaign, people can choose whether to be complicit in supporting war crimes or ending them,” he added.

May 15 commemorates the expulsion of almost two thirds of the Palestinian population from their homes and land in 1948. The ‘Nakba’, meaning ‘catastrophe’ in Arabic continues to this day, as Palestinians are forcibly expelled from their lands to make way for illegal settlements, which can then be advertised as vacation rentals by international companies.