Thousands in London Take to the Streets for Palestine 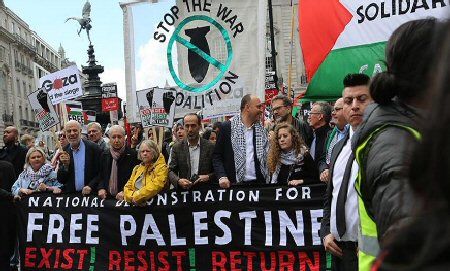 Thousands of people marched through central London, in a bid to end the Israeli occupation of Palestinian lands and the blockade on Gaza.

Palestinian resistance icon Ahed al-Tamimi was among the protesters who were organized by the Palestine Solidarity Campaign and the Stop the War Coalition.

The 17-year-old was arrested in late 2017, by Israeli authorities, and was later slapped with an eight-month jail term for “attacking” an Israeli soldier.

Another of the protesters was Allison Pierce.

Speaking to Anadolu Agency, Pierce said she was “appalled” by what is happening to Palestinians.

She said: “Do you want to know why I’m here today?

“I am absolutely appalled by what’s happening to the Palestinians. I think it’s genocide and I think it is murder. It’s inhumane and it’s a tragedy and I’m totally appalled. That’s why I’m here, I’m here for the Palestinian people, they are a nation and they need to have their country back.”

Glen Oliver, another protester who came to join the march from Southampton, thinks the international community does not react as “Palestinians are being shot in cold blood.”

“Why am I here? To support in solidarity with Gaza who are being murdered while the rest of the world just watches and these people are being shot down in cold blood with impunity by the Israeli terror state,” Oliver said.

Speaking to Anadolu Agency, Oliver exclaimed: “They [Israel] seem to do what they want, when they like and no one says anything. Our stupid foreign minister Jeremy Hunt condemns the few Hamas bombs and says absolutely nothing at all about the destruction of Gaza, they’re bombing their houses 24/7.

“There, 25 Palestinians murdered this week, nothing about that whatsoever. The ridiculous situation of the Eurovision Song Contest taking place in Tel Aviv is grotesque and people should boycott it, have nothing to do with it. So I’m here today to say end the bloodshed in Gaza and let’s stand with the Palestinians. Justice for Palestine.”

The march ended after speeches and dance shows on a stage opposite the Downing Street.

“We will not be made victims! We will continue to resist!” Ahed Tamimi said.

“We cannot stand by or stay silent at the continuing denial of rights and justice to the Palestinian people,” Corbyn wrote.