Golan Heights Settlement to be Named after Trump 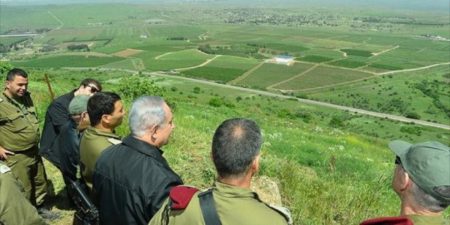 Israeli Prime Minister Benjamin Netanyahu says that a plot of land, in the occupied Syrian Golan Heights,  was allocated to be named after US president Donald Trump, saying that it will be approved, in the Knesset, next week.

Last month, PNN reports, the Prime Minister revealed that he wants to name a new settlement after Trump, out of gratitude for US recognition of Israel’s sovereignty over the territory.

In March, Mr. Trump officially recognized Israeli sovereignty over Syrian territory which it occupied during the 1967 war.  An estimated 20,000 Israeli settlers live in Golan Heights settlements, which most of the international community considers an illegal occupation.