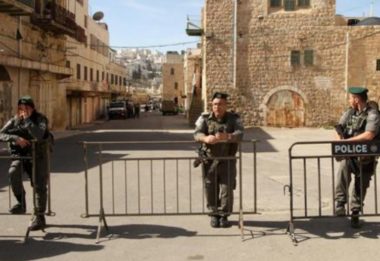 An illegal Israeli colonialist settler attacked, on Saturday morning, an official of the Hebron Rehabilitation Committee, in the Sahla neighborhood, near the Ibrahimi Mosque in the Old City of Hebron, in the southern part of the occupied West Bank.

Husam Abu Hadid said the colonist assaulted him while he was walking in the area and added that the attack happened despite the presence of Israeli soldiers, constantly deployed in the area.

He told the Palestinian News Agency WAFA that he was walking in the neighborhood, and just after he crossed the military roadblock in the area, an Israeli colonialist settler assaulted him, and struck him in the head, in addition to hurling insults at him.

The Legal Advisor of the Hebron Rehabilitation Committee, attorney Tawfiq Jahshan, said that he filed an official complaint with the Israeli police.

The Palestinians in the Old City, including workers of the Rehabilitation Committee, are subject to constant violations by the soldiers, and the illegal colonialist settlers. It is worth mentioning that the Norwegian Representative in Palestine, Ms. Hilde Haraldstad, visited the area, and toured with the members of the Rehabilitation Committee in the Old City, the Shuhada Street, the visitors Center and the Ibrahimi Mosque.

On Saturday evening, dozens of colonialist settlers carried out a provocative march in the streets and alleys of the Old City of Hebron.