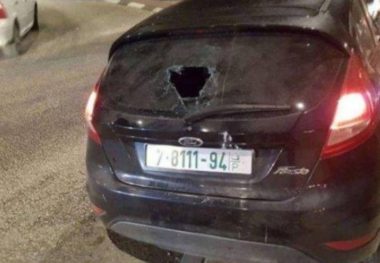 Resident Mohammad Sawafta, from Bardala town in the Northern Plains of the West Bank, said the colonists pelted his car with stones, causing serious damage.

He added that the colonists also attacked many cars in the area, while the soldiers failed to intervene and stop them.

Also on Saturday evening, dozens of illegal colonialist settlers carried out a provocative march in the streets and alleys of the Old City of Hebron, in the southern part of the occupied West Bank.

Also in Hebron, an illegal Israeli colonialist settler attacked an official of the Hebron Rehabilitation Committee, in the Sahla neighborhood, near the Ibrahimi Mosque in the Old City of Hebron, in the southern part of the occupied West Bank.