Corbyn Condemns US Treatment of Palestinians 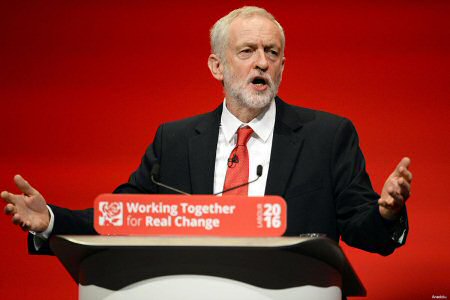 Head of the UK Labour Party Jeremy Corbyn has condemned American punishments against the Palestinian people, including the assault on their right to have Jerusalem is the capital of their state.

Jeremy Corbyn slammed US President Donald Trump saying: “Donald Trump, his recognition of Jerusalem as the capital of Israel has sparked a resurgence in tensions.

“And, we absolutely condemn that. What we want is peace achieved in the region. You don’t achieve it by the actions of Donald Trump, in that sense.”

Corbyn also spoke out against the cuts made to UNRWA, the United Nations body that deals with Palestine refugees, who have been enforced out of their homes by the Israeli Zionist since 1948.

“Also, the cuts that have been made to the funding of UNRWA, jeopardizing schooling and healthcare for Palestinian refugees across the Middle East, including 500,000 children whose only access to education is UN funded schools through UNRWA.

“No one can believe that such a state of affairs will ever bring about a long-lasting peace,” Corbyn said.