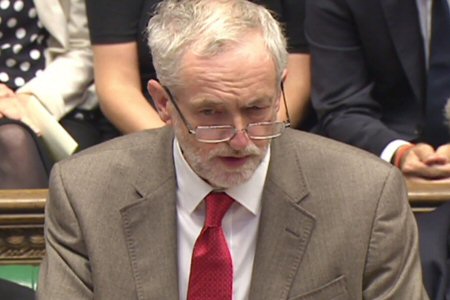 Leader of UK Labour Party Jeremy Corbyn has declined an invitation from pro-Israel lobby to attend a Balfour Declaration centenary gala dinner, next month, in London.

Corbyn announced, according to Days of Palestine, that he would decline an invitation celebrating the hundred-year anniversary of the Balfour Declaration.

The Balfour Declaration – which was a promise by the British Foreign Secretary in 1917 to establish a homeland for the Jews in Palestine – led directly to the creation of the Zionist regime in 1948 and the dispossession of the Palestinian people.

Chair of the Jewish Leadership Council in Britain Jonathan Goldstein called Corbyn’s decision not to attend the event “deeply unfortunate.”

“I do think it will not have been amiss for Mr Corbyn to understand that the Jewish community will have taken great heart and great comfort for seeing him attend such an event because it recognises the right of Israel to exist,” he said.

Goldstein added that Corbyn had also not attended a reception for Labour Friends of Israel at the party conference in October.

The UK government refused to issue an apology in April, this year, saying it had helped to establish a “homeland for the Jewish people in the land to which they had such strong historical and religious ties was the right and moral thing to do, particularly against the background of centuries of persecution.”

Protests will take place across Britain, next month, as Theresa May and her Israeli counterpart, Benjamin Netanyahu, celebrate the centenary.