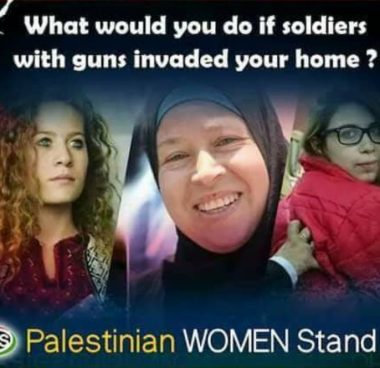 The “Ofer” Israeli military court decided, Monday, to remand world-renowned teen journalist ‘Ahed Tamimi, for four more days, after refusing to release her on bail, and accusing her of “threatening Israel’s security.”

‘Ahed Tamimi, 17, will be sent to court again this coming Friday, and is facing charges, which include “attacking officers,” along with her detained cousin, Nour Naji Tamimi, 21, when the army raided her family home in Nabi Saleh town, near Ramallah, last Tuesday, before abducting her along with her mother, Nariman Tamimi, 43.

The court will later be determining the fate of her detained mother, and cousin. Both ‘’Ahed and Nour, were seen on tape, arguing with Israeli soldiers who invaded Nabi Saleh.

When Ahed was 12, her mother’s cousin, Mustafa Tamimi, was killed before her eyes during a protest, shot in the head by a gas canister.

One year later, she witnessed the army shoot and kill her uncle Rashadi. Last week, her cousin Mohammed, nearly her age, was shot in the face by a rubber-coated bullet that penetrated his skull. He remains unconscious.”