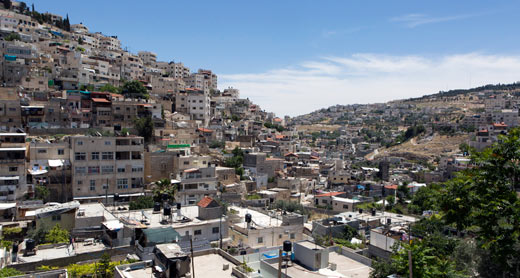 The Abu Rajab family of Silwan neighborhood, in East Jerusalem, found themselves homeless again on Saturday, after the Israeli government ordered the family to demolish their home for the second time in two months.

The family said they had to demolish the home themselves, after the Israeli Jerusalem Municipal Authority issued a demolition order, or else the Israeli authorities would come and demolish it, and charge exorbitant fees.

This is the second family in two weeks in Silwan that has been forced to demolish their own home – and the second time in two months that the Abu Rajab family has been rendered homeless.

The family lives in the al-Bustan area of Silwan, in east Jerusalem. According to Ma’an News Agency, “A spokesman of a Silwan-based committee formed to fight demolitions, Fakhri Abu Diab, previously told Ma’an that all 100 residential structures in the al-Bustan area are slated for demolition, and that the 1,570 residents of the area have exhausted all legal options.”

The Israeli human rights group B’Tselem says about the al-Bustan region of Silwan, the Israeli municipal government master plan defines the area as an open space where construction is prohibited.

The group states, “Silwan’s al-Bustan neighborhood lies in Kidron Valley, between the Wadi Hilwa neighborhood and Jerusalem Walls National park to the west and Silwan’s old quarter (Silwan al-Wasta) to the east. Until 1967 residents of Silwan cultivated fruit trees in the valley. City master plan No. 9, which was to determine the conservation to development ratio in the Old City Basin, defines al-Bustan Valley as an open space where construction is prohibited. The plan allowed only the few buildings in place at the time the plan was approved in 1976. Neighborhood master plans approved over the years for parts of Silwan did not allocate land for expansion or increase building rights. As crowding worsened, Silwan residents had no choice but to build in the valley and there are now more than 90 residential structures there. The buildings, built mostly since the 1980s, were constructed without permits. Approximately 1,000 people live in this neighborhood. The residents face great difficulties because it is not officially recognized and must contend with demolition orders issued against their homes. Residents cannot build additions to their homes or new homes on their land, nor can they lay down proper infrastructure or build public facilities.”

According to the Israeli human rights organization Ir-Amim, “The King’s Garden [is] an expansion of the City of David National Park and will involve the demolition of most of the al-Bustan neighborhood of Silwan.

“Similar to cases of settlements in the heart of Palestinian neighborhoods, national parks are also an arena in which state authorities have joined hands with private bodies, with the state transferring administration and development powers for public, touristic, archaeological and educational projects into the hands of right wing private organizations. Frequently, representatives of the organizations participate in the planning of the projects and even initiate them, and people who previously worked for them serve in senior positions in public bodies that are responsible for those projects, such as Israel Nature and Parks Authority. For example, the Elad organization, the biggest and most prominent of the right wing organizations, operates the City of David National Park, an educational project in the Tzurim Valley National Park, a project in the Peace Forest and the information center in the Mount of Olives cemetery, while also endorsing archaeological excavations in the entire area of Silwan.

“Archaeological excavations and tourism development are frequently undertaken and/or underwritten by the right-wing organizations, which in turn use them to justify their activity and disseminate and impose their historic narrative of Jerusalem through extensive educational activity. The narrative in question derives pronounced political and nationalist conclusions from historic Jewish presence, while covering up the diversity and wealth of cultures that existed in Jerusalem through its thousands of years of history. By-and-by, this awareness delegitimizes any non-Jewish presence in the city. The Education Ministry, the Defense Ministry, the Jewish Agency, and other bodies send hundreds of thousands of schoolchildren, soldiers, officers and college students from Israel and abroad to participate in educational projects operated by right-wing organizations in East Jerusalem, who in turn provide visitors with a story that binds history, heritage and politics in one. A visit to these tourist sites provides a comfortable setting for establishment of Israeli presence in East Jerusalem and at the heart of Palestinian neighborhoods, while ignoring its political implications.”