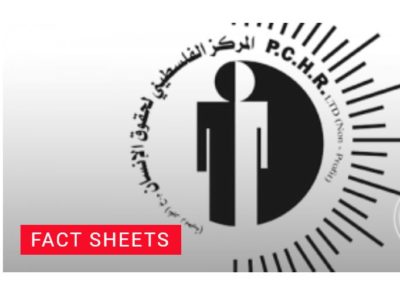 The Palestinian Center For Human Rights (PCHR): Introduction: On 05 March 2020, the Palestinian President issued a decree declaring a 30-day state of emergency to combat the spread of coronavirus (COVID-19) in Palestine. The Presidential decree bestowed upon the Prime Minister and relevant authorities the powers to “take all necessary measures to combat the threat of COVID-19, protect public health and achieve security and stability.” In suit, the Prime Minister announced several measures that included shutting educational institutions and other official institutions; restrictions on the freedoms of movement and expression; restrictions relevant to mandatory quarantine; and other relevant restrictions.

Through this paper, the Palestinian Centre for Human Rights (PCHR) endeavors to demonstrate the Extraordinary powers the state of emergency grants the executive authorities, and the freedoms and rights that cannot be infringed upon during this period. The argument presented herein is based upon Palestine’s international obligations under human rights treaties, particularly the 1966 International Covenant on Civil and Political Rights (ICCPR); and the 2003 Palestinian Basic Law (PBL), particularly Title Seven – State of Emergency Provisions. In this regard, PCHR reiterates a general principle that permits the use of Extraordinary powers in the narrowest terms, without abuse against political opposition or to harm citizens or their properties.

This paper intends to raise awareness among the public, governmental and executive bodies of the powers and restrictions entailed in the state of emergency through answers to the following questions:

It is an exceptional state declared by the competent authorities in the State when a threat is present on the security of the nation, allowing the state, in the narrowest terms, to enforce measures that may not necessarily fulfill its human rights obligations.

NB: The Palestinian Presidents’ acts in place of the PLC after its dissolution, as per Article 43 of PBL.

III. What are the most prominent rights that may be restricted and the scope of this restriction?