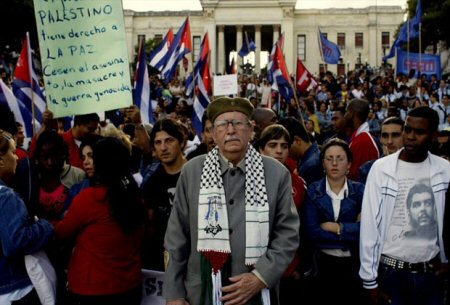 Cuba’s Parliament has reaffirmed its solidarity with Palestine during a visit by a delegation from the Popular Front for Liberation of Palestine (PFLP).

The delegation arrived at the headquarters of Cuba’s National Assembly of People’s Power (ANPP), led by Fahed Sulaiman, its deputy secretary general.

“The Palestinian cause is also ours,” said Ana Maria Mari Machado, vice president of the ANPP, at the meeting, adding that this is why, in foreign policy affairs, Cuba lends its support to Palestine.

Machado continued to say that the Caribbean island will always be on the side of justice, reaffirming that the country still rejects U.S. President Donald Trump’s December decision to declare Jerusalem as the capital of Israel.

The leader also stressed the necessity for unity among people, to achieve success in the Israeli-Palestinian conflict, recalling the example of the late revolutionary leader, Fidel Castro, who stood by the principle.

The PFLP, have, in turn, expressed solidarity with Cuba on numerous occasions.