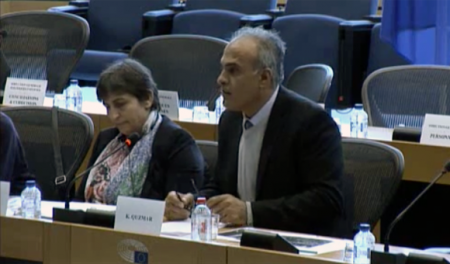 Ramallah, November 17, 2016—Defense for Children International – Palestine urged the European Union, during a meeting on Thursday, to pressure Israeli authorities to end ill-treatment of Palestinian children in the Israeli military detention system.

Khaled Quzmar, the general director of DCIP, addressed the European Parliament’s Delegation for relations with Palestine in Brussels during a meeting on the plight of Palestinian child prisoners. Quzmar focused on the effects of escalating violence across the occupied West Bank, including East Jerusalem, since October 2015, and the rapidly deteriorating situation facing Palestinian children living under prolonged Israeli military occupation. He called on members to hold Israeli authorities accountable to international law and end systemic impunity for grave violations against Palestinian children.

“International juvenile justice norms demand detention only be used as a last resort and prioritizes rehabilitation and reintegration,” said Quzmar, drawing attention to the rising numbers of Palestinian children in Israeli military detention and recent harsh Israeli laws targeting Palestinian children in East Jerusalem. “These increasingly harsh practices and laws prioritize the criminalization and punishment of children in complete disregard of international law.”

The European Parliament currently has 44 delegations that aim to promote the “principles of liberty, democracy, respect for human rights and fundamental freedoms, and the rule of law” in non-EU countries. The Delegation for relations with Palestine was established in 1993.

Israel has the dubious distinction of being the only country in the world that systematically prosecutes between 500 and 700 children in military courts each year. A recent report released by DCIP in April found three out of four Palestinian children endured some form of physical violence following arrest, and 97 percent of children had no parent present during the interrogation or access to legal counsel.

Israel held 440 Palestinian children in custody at the end of February 2016, more than twice the monthly average since 2011 and the highest number at any given point since the Israel Prison Service began releasing data in 2008.

Administrative detention permits military commanders or government officials to incarcerate individuals without charge or trial, based on secret evidence.

VIDEO: Life On Hold – The Policy of Administrative Detention