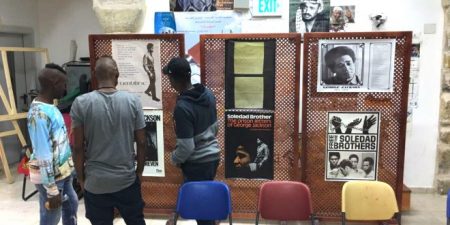 (PNN) The African Community Center, in the Old City of Jerusalem, last week, hosted the exhibition, “George Jackson in the Sun of Palestine”, which portrays the life and struggle of the iconic leader, Black Panther, George Jackson.

The exhibition was opened by president of the community, Nasser Qous, followed by a brief presentation on Jackson’s life, struggle and assassination, by Greg Thomas, English Literature professor at Tufts University, in Boston.

Thomas also spoke about the exhibited photos which included copies of Jackson’s letters, books, and media press releases from the Black Panther Party (BPP), which has just celebrated its 50th anniversary.

Jackson was arrested in 1961, at the age of 18, for allegedly “stealing $70 from a gas station, and charged with one-year-to-life sentence. Later, while already in prison, he was faced another trial when he was accused of killing one of the jailers, after another guard had killed three of Jackson’s comrades in prison.

Despite spending most of his charge in solitary confinement, Jackson adopted the revolutionary values against imperialism and capitalism, and educated himself to become an icon of African struggle against racism and police brutality, representing the revolution, resilience and education all over the world, before he was assassinated by guards in a San Quentin prison yard, in 1971.

In prison, he also wrote a collection of letters which were published as the book, “Soledad Brother.” Later, he smuggled out a second book entitled, “Blood in my Eye”. In addition, after his assassination, the prison guards found, in his cell, poetry by the Palestinian poet, Samih Al-Qassem, titled “Enemy of The Sun.”

“Jackson would most centainly be at home here.”

When asked why the exhibition was held at the African Community Center (ACC), Greg Thomas said it was mainly for ” the history of its presence and its ongoing political work.”

“I found out about [the ACC] during my first trip to Palestine, when Mahmoud Jiddeh introduced some of us to the Old City. What a surprise, then.  It shouldn’t have been. But it was,” Thomas said.

“I was fortunate enough to get to know a number of people in the community after getting information about the community two and a half years ago.  And, no words could express how amazingly welcoming they were, and are, either. Having learned of their presence, their work and their history of political imprisonment, and absolutely committed to African-diasporic connection as well as Palestinian liberation as a whole, I could imagine no more fantastic a space for this exhibition to land after its launch at the Abu Jihad Center on the Abu Dis campus of Al Quds University. George Jackson would most certainly be at home here!”

The particular African Palestinian community has been in Jerusalem for generations.  The majority of it came before and after the Nakba, either as pilgrims to visit Al-Aqsa Mosque (third holiest place in Islam), or to defend the land and participate in the struggle.

“It would be nice if we could at least use this event and the story of it to spread the word about these black populations or African communities across Palestine, for sure.  Then we can do more,” Thomas said.

“The African Community Center of the Old City in Jerusalem itself cultivates positive relations with other African communities all across Historic Palestine, and always seeks to do so in the world beyond.  They keep their eye on Jericho and Tulkarem, and Ethiopians inside ’48 Palestine, as well as Jerusalem, for example.   They are interested in youth exchange programs with other Black, Pan-African communities internationally.  We can certainly learn from them and could take this as a model for doing work without the limited imaginations of Western-dominated academia and the NGO-based advocacy industry of neo-liberalism or neo-colonialism.  Part of my post-exhibition research has been to think about how the Jericho Movement to Free Political Prisoners, in the U.S., can be related to the black histories of Occupied Jericho or Jericho along the “River Jordan”, sung about by the likes of Curtis Mayfield and Aretha Franklin: “People Get Ready.”   The African Community Center of the Old City of Jerusalem makes such marvelous things possible!”

The African-Palestinian ex-prisoner, Ali Jiddeh, in his word, said that he learned about Jackson through his writings in prison, and praised his struggle, independence and passion towards reading and writing in prison, saying that this represents an uncanny relation between both Black and Palestinian struggle, calling on Palestinians to walk in his shoe to reach freedom and independence.

Archive IMEMC report: 05/01/15 The Plight of Africa’s Exiles in Israel