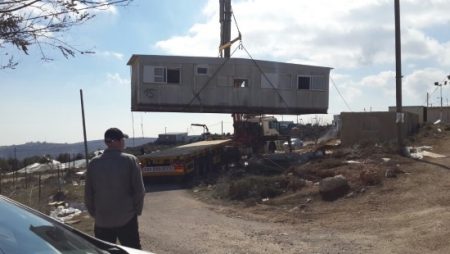 Israeli police have embarked on demolishing the Mona settlement outpost that was built on private Palestinian lands north of Ramallah, central West Bank.
Walla Israeli newspaper said, according to the PNN, that the demolition has started, after the area was evicted of settlers a few days ago on court order, amid angry settler protests.

The Ammona settlement outpost file has been open for years, since it was built on private Palestinian land, for which Palestinians have petitioned and won the case.

Shortly after the eviction order, Israeli Prime Minister Benjamin Netanyahu has approved the construction of 3,000 settlement units all over the occupied West Bank and Jerusalem.

Since US President Donald Trump took office on 20 January, Israeli authorities have approved the construction of over 6,000 settlement units, which are condemned illegal under international law.