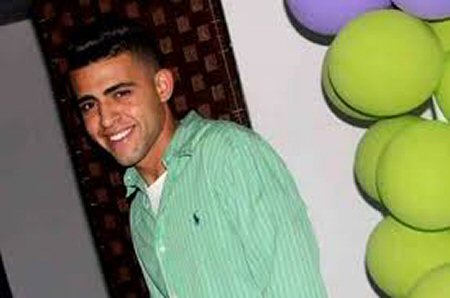 Two months ago, an Israeli soldier shot and killed a 19-year-old Palestinian youth. B’Tselem’s investigation shows that, contrary to the military’s claim, the Palestinian and his friends did not pose any danger to the forces.

According to the report issued by B’Tselem , on 22 December, 2016, an Israeli soldier shot and killed Ahmad Nasha’t ‘Othman Kharubi, 19, a resident of al-Birah. Kharubi was killed in Kafr ‘Aqab after Israeli security forces, accompanied by Israeli Civil Administration representatives, entered the village at around midnight.

Forces came to the village to seal the home of Masbah Abu Sbeih, who, two months earlier, shot and killed two Israelis in an East Jerusalem attack. Abu Sbeih’s home is located in a part of Kafr ‘Aqab defined as Area C, but Kharubi was killed in a part of the village located inside the municipal borders of Jerusalem, according to Al Ray.

The Israeli army claimed that, during the night, their soldiers came under fire and incendiary devices were thrown; so, they responded with gunfire toward a person throwing an incendiary device, killing them.

“Z.T., F.D., Ahmad, and I hid behind tires and the corners of buildings so that we could see what was going on from where we were. There were hardly any clashes on our side of the roadblock, but from the south, on the other side of the jeeps we heard the sounds of stun grenades and live gunfire, but we couldn’t see the clashes. We saw snipers on the roofs of tall buildings.

Fifteen minutes after we arrived, a sniper fired a live bullet that hit Ahmad, but no-one could see him or work out where the sniper was – on a roof or on the ground. The guys who were closest to Ahmad called out for an ambulance. One of the guys approached Ahmad and another shot was fired toward him, but it didn’t hit anyone. The guys who were close to Ahmad lifted him up and moved him to the sidewalk.”

Kharubi was dead upon arrival at the hospital. Physicians unsuccessfully attempted to resuscitate him, before pronouncing him dead. The bullet struck the lower part of his neck, to the left, and exited from the rear through the upper right side of his back.

B’Tselem’s investigation shows that no incendiary device was thrown at the security forces from the area where Kharubi and the other youth were positioned. As they were 80 to 100 meters away from the soldiers, they could not pose any danger.

Firing at the torso of a person hiding behind a wall, even if he were throwing stones at the security forces, is unjustified and illegal.

B’Tselem also explained that Israeli forces entered Kafr ‘Aqab in a manner, leading to the pointless death of this young man, in order to execute the punitive sealing of a home belonging to the family of a person who carried out an attack. Such measures are illegal, immoral, and constitute collective punishment, and accordingly the entire operation was fundamentally improper.