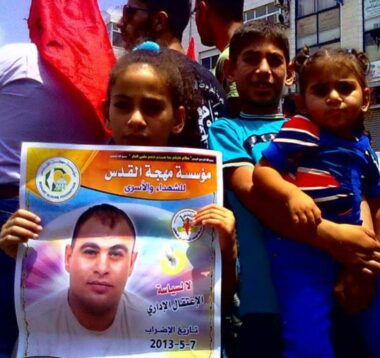 The Palestinian Prisoners’ Society (PPS) has reported, on Wednesday evening, that the hunger-striking detainee, Emad al-Batran, has suspended his hunger strike after reaching an agreement for his release in July.

The PPS said al-Batran, 47, from the southern West Bank city of Hebron, went on hunger strike for 47 consecutive days, demanding an end to his arbitrary Administration Detention, without charges or trial.

It added that the current Administrative Detention order against him ends in July of this year, and will not be renewed, according to the agreement.

It is worth mentioning that al-Batran was abducted on January 27th, 2020, and remained held under the Administrative Detention orders.

He then decided to hold an open-ended hunger strike when he was held in solitary confinement in Majeddo Israeli prison, starting on February 20, 2021, demanding ending these orders.

Al-Batran, a married father of five children, recently suffered a serious health setback but remained determined to continue his strike.

It is worth mentioning that this is the third hunger strike al-Batran holds, protesting his Administrative Detention since the year 2013, as he was repeatedly abducted and detained without charges or trial.

During his various abductions and imprisonment, including before the year 2013, al-Batran spent a total of ten years in prison, including when he was held under the Administrative Detention orders.