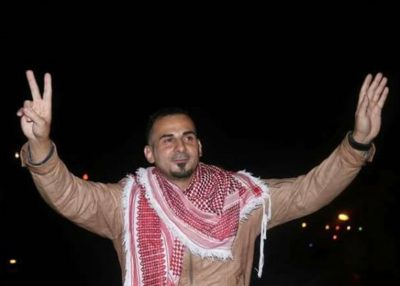 The Israeli Prison Authority has released, Monday, detainee Bilal Kayed, who was held under arbitrary administrative detention orders after serving a 14.5-year prison sentence, and held a 71-day hunger strike until reaching an agreement ending his illegal detention.

The Palestinian Detainees’ Committee said Kayed was released at the Jabara military roadblock, south of Tulkarem, in the northern part of the West Bank, were his family, hundreds of Palestinians and representatives of political factions, gathered to greet him.

The leftist Popular Front for the Liberation of Palestine (PFLP) also held a massive celebration welcoming Kayed, and marking the 49th anniversary of its establishment. Kayed held a 71-day hunger strike after Israel decided to force him under Administrative Detention, without charges or trial, after he already served a 14.5-year prison sentence.

He stopped his strike on August 24th, after reaching an agreement ending his illegal Administrative Detention, and setting December 12th as the day for his release.