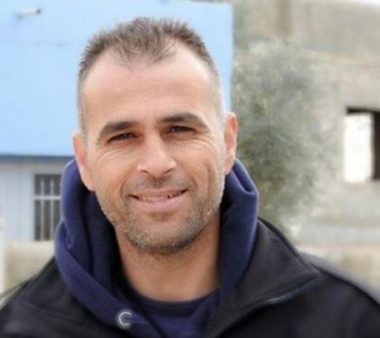 Yousef Nasasra, a lawyer with the Palestinian Detainees’ Committee, said that a detainee, identified as Ebaa’ Omar Barghouthi, 40, is ongoing with a hunger strike he started 27 days ago, protesting being held under arbitrary Administrative Detention orders, without charges or trial.

Nasasra said Barghouthi is held at Ohali Kidar Israeli prison, in Be’er as-Sabe’ (Beersheba), and is refusing checkups, or any sort of medications.

The detainee recently started vomiting blood, in addition to severe abdominal pain and migraine, and became very weak in addition to repeatedly having high fever.

The soldiers frequently invade and search his very small cell, and took his clothes, except what he is wearing.

It is worth mentioning that Barghouthi was abducted on August 2nd 2017, and received a six-month Administrative Detention order, and was renewed it for four additional months, without charges or trial.