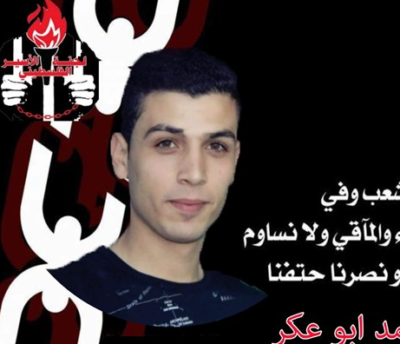 The Maan Palestinian News Agency has reported that a detainee, from Deheishe refugee camp, south of Bethlehem in the occupied West Bank, has refused an offer to be released in four months in exchange for ending his hunger strike, and added that the detainee is demanding that any offer must include his two detained friends.

It said that Mohammad Nidal Abu ‘Aker, 25, who was abducted on November 1st, 2018, is also a former political prisoner, and started a hunger strike, along with Mustafa al-Hasanat, 21, from Deheishe, and Hotheifa Halabiyya, 28, from Abu Dis town, near Jerusalem.

Abu Aker, who turned 25 this past Monday, started the hunger strike 29 days ago, along with al-Hasanat and Halabiyya.

It is worth mentioning that al-Hasanat was abducted and imprisoned three times, including his current imprisonment after he was abducted on June 5th, 2018, and was slapped with three consecutive arbitrary Administrative Detention orders.

He was also shot and injured by Israeli soldiers several times before and is still suffering from the effects of those injuries.

In addition, Hotheifa Halabiyya was abducted and imprisoned three times, and is facing several complications, especially since he was previously treated for leukemia and requires constant checkups. He is a married father who has been imprisoned since he was abducted on July 10th 2018.