Prisoner shackled to bed, held in solitary with no visitation, after refusing to be strip-searched 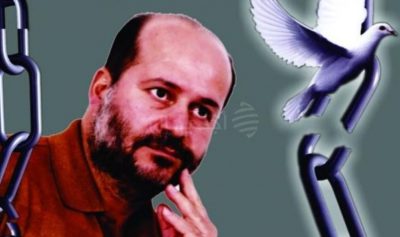 The Palestinian Detainees Committee reported on Wednesday that the Prison Administration in Nafha has imposed new sanctions against Wael an-Nadsha by cuffing his arms and shackling his legs on a bed for one week, and denying him visits for a month. This is in addition to a 250 shekel fine, after alleging that he assaulted an officer.

The Committee said that two days ago, Wael was attacked by Special Forces in Ramon Prison and suffered various injuries when the soldiers transferred 70 detainees from Ramon to Nafha.

Wael refused to be strip-searched and shackled during the transfer, according to the Committee, and in response the soldiers beat him in the face and head and injured him so severely that he ended up in the hospital.

The prison authorities handcuffed Wael’s hands above his head in his hospital bed, and his legs shackled. They took this action after holding some kind of internal hearing – with no legal counsel present for the accused – and deciding that this should be his punishment.

updated from:
Detainee Hospitalized After Many Soldiers Assaulted Him In Prison
Feb 27, 2018 @ 06:12

The Palestinian Detainees’ Committee has reported, Monday, that a detainee was moved to a hospital when many soldiers assaulted him in Ramon Israeli prison, after special forces invaded various sections of the facility and started the transfer of 70 detainees to Nafha prison.

The committee said that the detainee, Wa’el Natsha, was assaulted by soldiers of the Nahshon special forces, when dozens of them invaded the detainees’ rooms, during morning hours, Monday, and started the transfer of seventy detainees to Nafha.

It added that Wa’el refused to be subjected to humiliation and provocative naked body searches, and was assaulted by many soldiers, resulting of various cuts and bruises, before he was moved to a hospital for treatment.

The Committee stated that the detainees in Israeli prisons are subject to constant violations, in addition to being deprived of basic rights guaranteed by International Law, and added that Israel’s main target is to humiliate the detainees and subject them to collective punishment, under various vague and unfounded allegations.

It is worth mentioning that Wa’el, from the southern West Bank city of Hebron, was taken prisoner twenty years ago, and is serving a life term.