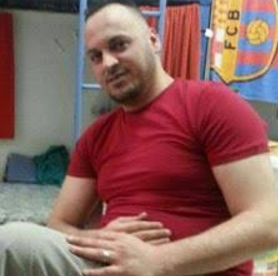 Palestinian detainee Jawad Jawareesh, 40, declared hunger strike this past Sunday from his solitary confinement cell in the Ramon Israeli prison, protesting ongoing violations, and his repeated transfers from one prison to another without any reason but to keep his restless.

The detainee is from the West Bank city of Bethlehem, and is a married father of two children; he was a member of the Al-Aqsa Brigades, the disbanded armed wing of Fateh movement, and was sentenced to 40 years after his abduction in 2002.

It is worth mentioning that the administration in Eshil Israeli prison has recently decided to vacate all political prisoners, and transferred detainees, who are members of Hamas to Ohalei Qidar prison, and Fateh detainees to Nafha.

Jawareesh was one of the detainees moved to Nafha, but instantly after being moved there, the soldiers moved him to Ramon prison.

He protested being singled out, and demanded to be transferred back, but the prison administration refused, placed him in solitary confinement after several soldiers assaulted him; he then started a hunger strike.

Mohammad Hamida, the head of the Association of Palestinian Prisoners and ex-Prisoners “Hossam,” said that what Jawareesh is going through is part of a policy used by Israel against the detainees.

Hamida said that when the detainees are frequently moved from one prison to another, they can never have any sense of stability, and are deprived from family visits in addition to being prevented from communicating with other detainees.

He called on international human rights and legal groups to intervene and stop the constant and escalating violations against the detainees, and the illegal policies of medical neglect, which recently claimed the life of detainee Yasser Hamdouna.