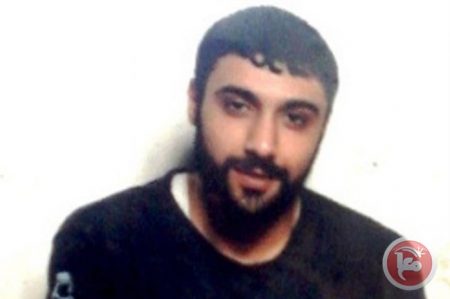 An autopsy has confirmed that the cause of death for 41-year-old Palestinian prisoner Yasser Thiab Hamdouna, who died in Israeli custody Sunday morning, was cardiomegaly, a condition in which the heart is enlarged, and can lead to sudden death.

A statement from the Palestinian Committee of Prisoners’ Affairs, released on Monday, announced the cause of death following the autopsy. Initial reports indicated the prisoner had died of either a stroke or of a heart attack. The committee said that the autopsy of Hamdouna’s body was carried out in the Abu Kabir Forensic Institute, in Tel Aviv, with the participation of two Palestinian doctors — Ashraf al-Qadi and Rayan Ali — as was ordered by the Israeli central court the day prior.

According to Maan News Agency, two lawyers from the committee, Iyad Misk and Karim Ajwa, also attended autopsy. Hamdouna’s body is, reportedly, to be returned to his family on Monday. He is from the village of Yaabad, in the northern occupied West Bank district of Jenin.

The committee’s statement reiterated the accusation that Hamdouna faced deliberate medical negligence by Israeli prison authorities and doctors, who were aware of the fact that he had been suffering from a number of health issues, including shortness of breath, heart problems, and ear pains.

He was severely beaten by prison guards in 2003, after his imprisonment in June of that year, and had since been taken to the al-Ramla prison clinic a number of times, after his health deteriorated, where lawyers and prisoners’ rights groups familiar with the case said he was routinely denied adequate treatment.

He finally underwent cardiac catheterization surgery in Israel’s Afula hospital, in January of 2015, and continued to remain in serious health condition after being denied the necessary medical checkups, and was only provided anticoagulant medication as treatment.

According to the Palestinian prisoners’ solidarity network Samidoun, during his internment inside Israel’s Nafha prison, Hamdouna had also gone on hunger strike in protest of his medical neglect and was being held in isolation. Hamas spokesman Abd al-Rahman Shadid said, in a statement on Sunday, that Hamdouna’s death “showcased the Israeli occupation’s cruel brutality,” affirming that no Palestinian prisoner held in Israeli prisons or jails was safe.

Hamas spokesman Sami Abu Zuhri, meanwhile, urged the international community to “quit dealing in double standards and hold the (Israeli) occupation responsible for the violations and neglect of Palestinian prisoners who suffer in Israeli jails.”

Palestinians detained by Israel also announced, Sunday, a three-day hunger strike in protest and mourning following the news of Hamdouna’s death. The Committee of Prisoners’ Affairs reported that Israeli prison forces had raided a number of sections in Nafha prison and assaulted Palestinian prisoners, following a protest by the detainees over Hamdouna’s death.