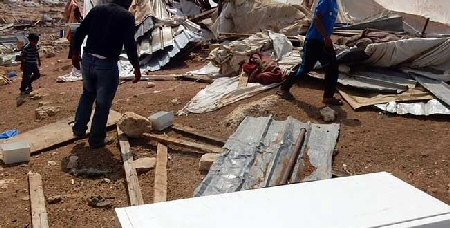 Israeli forces, on Tuesday morning, demolished a new classroom made out of Zinc, in the Abu Nuwwar school, Khan Al-Ahmar, occupied East Jerusalem. This is the fourth time the school is demolished by Israel, who refuses to give it permission to continue, according to the PNN.

According to rights group B’Tselem, the Abu a-Nuwar community consists of more than 100 families, with a total population of about 600, about half of them minors.

Residents of the community have been legally battling the plan to expel them for a number of years. In a petition filed in 2015, the HCJ issued an interim injunction prohibiting the demolition of some structures in the community.

However, the caravans, like the tents the authorities destroyed since January, were not included in these.