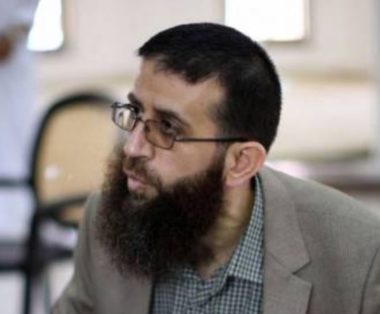 The Palestinian Prisoners’ Society (PPS) has reported that detainee Khader Adnan is ongoing with the hunger strike he started 40 days ago, protesting his continued imprisonment.

The detainee, from Arraba town, south of the northern West Bank city of Jenin, started the strike on September 2nd, and has been denied visits with his lawyer since September 17th.

Although he has not been sentenced by an Israeli court since his abduction on December 11th, 2017, Khader is facing “incitement charges.”

He has been frequently placed in solitary confinement, while the Israeli prison authority also confiscated his books, pens, paper, radio and newspapers, in addition to preventing him from communicating with other detainees.

His wife said that Adnan stated in a letter, which was smuggled from prison, that he is facing serious health complications, and cannot move around without a wheelchair.

In addition, human and prisoner rights groups in Palestine have called on the Red Cross to intervene, and pressure Israel into abiding by International Law and all related human rights treaties.

Adnan has previously held two major hunger strikes; one was a 66-day long hunger strike, in 2012, and another lasted 55 days, in 2015, in protest of his administrative detention, without charges or trial.

He is considered a senior political leader of the Islamic Jihad movement in occupied Palestine.