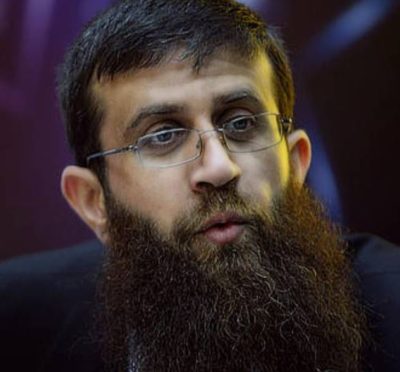 The Palestinian Prisoners’ Society (PPS) has reported, Thursday, that the administration of the al-Jalama Israeli detention facility, declined a request by one of its lawyers to visit with hunger striking detainee, Khader Adnan.

In a statement, PPS lawyer Saleh Ayyoub, said that Adnan is ongoing with his strike for the 19th consecutive day.

Ayyoub added that the PPS conducted all legal measures to arrange for this visit, but once he arrived at the facility, the administration claimed Adnan’s medical condition prevents him for visits.

The PPS said that Israel frequently prevents lawyers from visiting with hunger striking detainees, in addition to repeatedly transferring the detainees to various prisons, and constantly makes up justifications to prevent such visits.

It is worth mentioning that Adnan, 40, from Arraba town, near the northern West Bank city of Jenin, started the hunger strike on September 2nd, protesting his continued detention.

Adnan has previously held two major hunger strikes. One was a 66-day long hunger strike, in 2012, and another lasted 55 days, in 2015, in protest of his administrative detention. In related news, the PPS said that three other detainees are also ongoing with hunger strikes;

Omran al-Khatib, 60, from Jabalia in northern Gaza, started the strike 47 days ago, demanding early release after spending 21 years of a 45-year prison sentence, and is suffering from various health issues, including Coagulation, high blood pressure, a chronic stomach disease, high cholesterol and cartilage in the spine.

Detainee Jawad Jawareesh, 36, from Bethlehem, is protesting solitary confinement in Hadarim prison, after he was transferred there from Asqalan prison. He was taken prisoner 17 years ago, and was sentenced to a life term and 30 years in prison.

The third detainee, Ismael Oleyyan, 27, from Bethlehem, started the hunger strike three days ago, protesting being held under an Administrative Detention order.