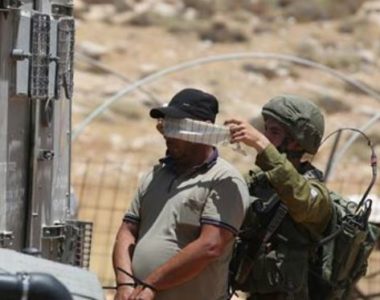 Israeli soldiers abducted, on Friday at dawn, two young Palestinian men from Shweika area, north of Tulkarem in northern West Bank, in addition to one woman from Beit Lid village, east of the city, and interrogated many Palestinians while violently searching their homes. On Thursday evening, the army abducted three Palestinians in Anabta village, after stopping them at a military roadblock.

The Tulkarem office of the Palestinian Prisoners’ Society (PPS) said the soldiers abducted Ibrahim Nimir Nayfa, while violently searching his home, in Shweika area, in the city, and attacked his father.

It added that the soldiers abducted Suleiman Azzam Abu Sheikha, and interrogated his father and brothers, after storming and searching their homes.

The army also invaded and searched many homes in the area, and fired many gas bombs and concussion grenades at local protesters.

Owners of some of the invaded homes have been identified as Adnan Atiyya Zibda, his son, Khaled, in addition to Bassam Suleiman Abu Sheikha and his sons Wadea’ and Saleh.

In addition, the soldiers abducted Kholoud Azzam Freij, after invading her home and searching it, in Beit Lid town, east of Tulkarem.

Local sources said the soldiers interrogated the woman for several hours, before releasing her.

The soldiers also launched a surveillance balloon, and drones, above the villages of ar-Ras and Kafr Sur, south of Tulkarem.

On Thursday evening, the soldiers invaded in Anabta town, east of Tulkarem, and installed a roadblock at its eastern entrance, before stopping and searched many cars, interrogated several Palestinians and abducted Hassan Azzam Abu Sheikha, Saleh Bassam Abu Sheikha and Jihad Emad Ekbariyya, all from Shweika area.

In related news, the soldiers abducted a young man, identified as Ali Sho’ani, from Qalandia refugee camp, north of Jerusalem, after stopping at the junction of the nearby ar-Ram town.