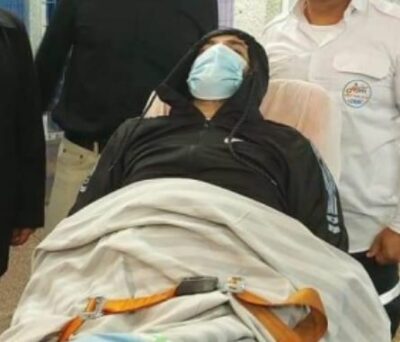 Maher al-Akhras, a Palestinian political prisoner who held a hunger strike for 103 days, rejecting his arbitrary Administrative Detention without charges or trial, was released on Thursday morning.

The Palestinian Prisoners’ Society (PPS) has reported that Al-Akhras, 49, was released, and was moved to a Palestinian hospital.

Al-Akhras, from Sielet ath-Thaher town, south of the northern West Bank city of Jenin, went on hunger strike on the day of his abduction, on July 27th 2020, after Israel slapped him with a four-month Administrative Detention order. During his hunger strike, Israeli intelligence officers tried to get him to quit his strike, by promising without guarantees that the Administrative Detention order will be renewed just one time.

Despite his seriously deteriorating condition during his strike, the detainee refused to end the strike, and insisted on being released.

He suspended the strike after the final commitment by the Israeli authorities to release him on November 26, 2020, and a firm commitment not to renew his administrative detention, as he will spend the remaining period until his release receiving hospital treatment.